Udder health during the dry period

Approximately 60% of all early lactation mastitis cases has an origin in the dry period (please refer to Figure 1). Therefore, to prevent new infections from occurring prior to calving and to cure any existing infections, dairy cows should be dried off methodically and carefully.

Two critical stages of the dry period when udder health is at risk are: the first week after drying off and the week prior to calving (please refer to Figure 2). During the first critical stage, the udder’s natural defence mechanism − a keratin plug in the teat canal − is formed, while in the second stage, prior to calving, this plug slowly disappears in preparation of lactation. The keratin plug prevents bacteria from entering the teat canal during the dry period.

The udder is very susceptible to new infections at the beginning and end of the dry period. Furthermore, some cows do not form a keratin plug in the teat canal during the entire dry period (please refer to Figure 3).

Figure 3: Evolution of teats without a keratin plug during the dry period (Green et al. Journal of Dairy Science 2002)

Good milk yield management at the point of drying off is very important because a high milk yield will increase the risk of developing a new intramammary infection by 100% after drying off. A high volume of residual milk in the udder will stimulate the white blood cells to concentrate on absorbing milk fat cellular debris and become less active in preventing bacteria from entering the udder. In addition, cows with a high milk volume at drying off have a weaker keratin plug compared to other cows due to delayed keratin plug formation in the teat canal.

An intramammary antibiotic treatment at drying off will eliminate existing infections and prevent new infections during the first few weeks of the dry period. However, this treatment alone will not prevent new infections later on in the dry period due to the limited coverage of antibiotics. Research conducted at international level and by Lely indicates that using an internal teat sealant in combination with antibiotics further reduces the risk of new infections. This product mimics the natural keratin plug and prevents bacteria from entering the teat canal. The use of an internal teat sealant alone is possible in low Somatic Cell Count (SCC) cows, however extra hygienic care has to be taken when administering the teat sealant. Make sure the internal teat sealant is removed after calving, so that the plug does not end up in the milking system.

The proper dry off treatment should be discussed with the herd veterinarian and noted in a Standard Operating Procedure manual. The therapy depends on the duration of the dry period, the occurrence of specific mastitis pathogens, treatment success, farm specific situation, etc. By monitoring the SCC level of cows prior to the start of the dry period and again after calving, dry-off therapy and management can be objectively evaluated and adjusted, if necessary.

Reducing the risk of infection early in the dry period

Figure 4: Advised T4C settings; this will ensure a timely decrease in concentrates to 2 kg at the expected moment of dry off. In larger herds, drying off groups of cows can be done routinely after being fed a specific drying off ration.

Reducing the risk of infection during the entire dry period

Reducing the risk of infections during calving 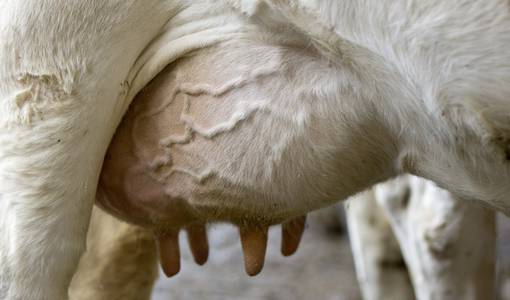