On several occasions during the three-day conference, Lely explained its various research projects to an audience of more than 300 international scientists. Topics such as claw health, udder health, nutrition/feeding, barn layout, grazing and sensor technology were discussed. In addition, many of the scientists used the opportunity to visit the ‘De Deelen’ dairy farm and cheese factory.

The scientists participated in three workshops during their visit to the dairy farm and cheese factory. This helped them to see and experience what is needed to design and facilitate an optimally functioning barn by means of management and daily routines. They also witnessed how cheese is made and how the Lely systems take milk quality into account.

Hands on, Rutger van de Streek, Milking & Cooling Specialist with Farm Management Support, showed how the ‘nine cow touches’ are put into practice at the feed alley. In an ideal situation, you will only touch a cow in lactation nine times, from insemination to trimming and from calving to dry off. But when to do what and how to do so as efficiently as possible? In addition to centralizing the work, a combination of routines, barn layout and technology also helps, said Rutger. “When this all works well together, you can apply the nine cow touches properly and effectively” he added.

The milk, harvested by four Lely Astronaut milking robots, is partly processed into cheese on their own farm. “‘Riperkrite’ cheese is our specialty,” explained Sietse and Hendrika de Jong. As farmers and cheesemakers, they know exactly what milk quality is and the effect it has on cheese, for example. “A change in the cows’ ration will ultimately have consequences for the cheese. For that reason it is very important that we can obtain current, frequent and exact figures” explained Sietse and Hendrika. “Sensor technology helps us with that, as long as it remains practical.”

During the ‘Synergy in Sensor Data’ workshop, Anneke Gouw, Udder Health Specialist at Farm Management Support, held a discussion with the scientists. Various questions were explored, such as which sensors are already in practice, what does Lely do with them, and, perhaps the most interesting of all, what do farmers do with them? More is not always better, but smart usage of sensors is. Let all sensors measure and collect data, but translate it into information that farmers actually need. Combine sensors and create synergy.

During the conference, various Lely speakers presented their research. Two of them are detailed below. Both Anneke Gouw and Arjen van der Kamp work for the Farm Management Support (FMS) department at Lely. FMS advisors aim to optimize individual dairy farms in their area of interest. Whether it is a matter of daily management, cow, claw or udder health, a Lely FMS advisor is there to offer support.

In her research, Anneke has looked at the Dutch guidelines (KNMvD) regarding drying off versus the actions taken by dairy farmers based on MPR and robot cell count indication. She has done so to gain insight into how often treatments are done based upon the current guidelines and to determine the effectivity of dry-off therapy with or without the presence of frequent cell count measurement.

Her research includes information from five commercial Dutch dairy farms with an MQC-C (Lely cell count measuring) and 1,697 dry-offs. The total period of measurement time varied per farm, depending on the sensor installation date. Dry-off treatments were collected via T4C or other management programs approved by the participating dairy farmers.

Robot cell count supports the choice for treatment, resulting in the number of mastitis cases being halved in the first 30 days of lactation to just 4.7%. The use of antibiotics around the dry-off period remained the same with the availability of the cell count measurement device. This means that the allocation of antibiotics is more effective when the robot cell count is available.

Arjen van der Kamp, Management Systems and Data Specialist with Lely’s Farm Management Support, presented his findings on barn layout and the effect it has on the efficiency of farms with an automatic milking system (AMS) in the Netherlands.

Labour efficiency is often an important factor in the decision to install an AMS. In order to ensure a correctly functioning AMS with according labour efficiency, the cows’ behaviour in terms of voluntary visits to the AMS is of significant interest. Influencing factors include, besides the general management and feed management, feed quality and barn layout. 127 Dutch dairy farms were included in the research, with a total amount of 240 AMS units. In addition, 30 barn layouts variables were identified.

Looking at the results, Arjen emphasized the milk yield per minute box time and the percentage of cows with a milk interval of over 14 hours. These are the most important indicators of workload (labour efficiency) and the potential capacity of the AMS. A closer look at the effects of the milk interval indicated, among other things, that not having a straw pen and not having a split entry waiting area caused the percentage of cows with a milk interval of more than 14 hours to rise slightly. In addition, placing the AMS setup parallel to the feed fence or with the head away from the feed fence (+9.24%) and having dead-end routes (+2.62%) in the barn all had a negative effect on the milk interval.

Arjen explained that, while the barn layout variables do contribute to the performance indicators on a dairy farm, variations are mainly caused by other variables, such as feed management. Barn layout variables associated with the AMS environment, such as the setup and having a straw pen, have the biggest effect on the performance indicators. It is also important not to interfere with the free cow traffic at any time. Because cows all have a ranking within their herd, low ranked animals need to be able to avoid high ranked animals at all times, be this around the AMS area, in the cubicles or at the feed fence, concluded Arjen.

It is a fact that automation, sensor technology and Precision Dairy Farming have entered the world of the dairy farmer. It is also a fact that continuous development is taking place. However, it is important that these developments, and with them the practical applications, work in favour of dairy farmers in order to jointly secure a sustainable, profitable and enjoyable future for farming. Lely continuously strives to build bridges between scientific and technological developments and their practical uses, with the aim of unburdening dairy farmers around the world.

A practical example of this is the ‘Health Attention’ feature in Lely T4C InHerd, where data on all the sensors available on the farm is combined into just one report.

Preparation for dry period pays off

Dry period infections are a very important part of the epidemiology of environmental pathogens such as E. coli and S. uberis. These infections often remain subclinical throughout the dry period, but are then an important cause of clinical mastitis in the first few months of the subsequent lactation period. This article will give more insight and information about the different stages of the dry period and their relation to mastitis. 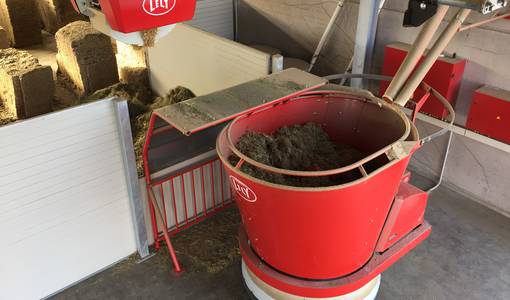