Webinar
What's The Cost Of Milking With A Robot? 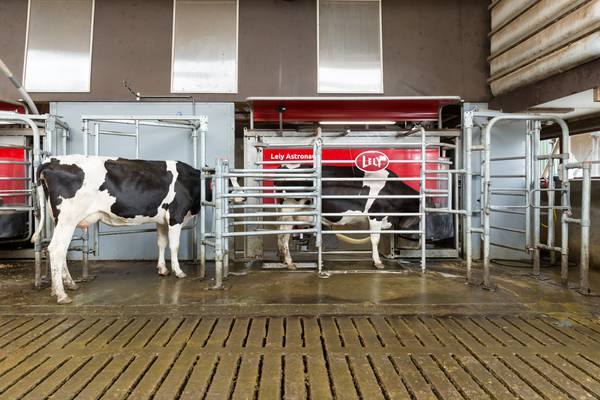 Lely provides calculations based on a like for like comparison between a conventional herringbone parlour and a Lely robot. Figures are based on a 200-cow herd milking three times a day, with one member of staff in the parlour, a daily average yield of 30 litres and a total daily production of 6,000 litres. The figures below are provided by Lely Center Midlands.

It should be noted that these figures are only an example provided by Lely and readers should compare with their own system, as costings may vary.

Labour savings are likely to be an attractive proposition when considering robotic milking. Andy Wilson of Lely Center Midlands says he believes this labour challenge is here to stay, and ‘robots are the ultimate relief milker’. However, when looking at maintenance costs, it should be pointed out that the figures favour parlour with there being a £12,644 difference in annual maintenance costs between the two systems. Mr Wilson concedes: “Robots are more expensive to service, but they are running 24 hours a day, with a very low labour requirement.”

While the cost comparison shows figures in favour of the robot, it is worth noting these figures show a costing based on variable costs, not including fixed costs. Mr Wilson says it is difficult to do a fixed cost calculation for parlours, due to the variety in individual farm costs. Therefore, the figures below show the fixed costs of a robot, which should be compared against an individual’s parlour costings.

These fixed costs have been calculated based on one robot milking 50 to 60 cows a day, at an estimated 170 milking per day. The water cost includes everything the robot does itself. It does not include external washing of the robot, and bulk tank wash.

What is the extra milk worth?

Lely advise that when budgeting robots for your business to include a 10 per cent milk yield increase. “Most people see between a 10 per cent and 20 per cent yield increase. The Lely Centre Midlands average across their territory is a 20 per cent milk lift,” says Mr Wilson. This is dependent on other factors such as nutrition, housing, and management. “If you are not feeding for the yields, you are not going to get the yield” he adds.

When looking at what a yield increase is worth, based on the previous example of a 200-cow herd, a 10 per cent increase in yield would mean an extra £204 per day based on 34ppkg.

While there is a perception that it is expensive to feed cows in robots, Mr Wilson says this is not the case. This, he says is because the robots allow feed inputs to be targeted to each cow, and by feeding the cow as an individual there will also be improvements to cow health and production.

Independent data from Kite Consulting across 249 dairy farms in 2021, shows that feed costs for robot systems were no different to other three times a day milking systems.