The main question is why milk quality  is so important. First of all: because it is a human food! Secondly because the farmer gets paid for the milk. The amount of fat and protein, somatic cell count, bacterial count, freezing point and free fatty acids are also decisive factors for the eventual payment; the approach varies from one country to another. In this article we will focus on the Somatic Cell Count.

Older research (dating from 5 to 10 years ago) of automated milking shows a decrease in milk quality. Various reasons may account for an increased SCC after start-up with an automated milking system, ranging from stress during the construction period and existing poor udder health to newly acquired animals and a change of management. In a recent German survey (2012), milk production and milk quality were compared before and after start-up on 15 dairy farms.

Figure 2 - SCC before and after start-up (Lely Center Cologne)

High quality milk can be produced by means of automated milking. However, hygienic working is essential and the dairy farmer should also ensure that the correct settings are used. Effective Farm Management Support as provided by the Lely Center Cologne (Germany) addresses many aspects during start-up. It is important that the right milk volumes (optimum between 9 and 11 kg) are extracted from the cows, with the correct milking frequency (optimum between 2 and 4 times). All in all, good Farm Management Support is one of the main factors to ensure a successful start-up. 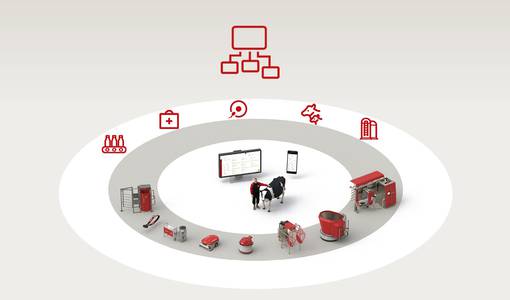