“The warning alarms go off constantly through the night”

The system is customisable and the farmer can choose which issues trigger an alarm and which don’t. Alarms can be switched off at night too, however it’s important to remember that they are a necessary part of automation. An example of a critical alarm is if three cows in a row fail to be milked fully. It might mean that the laser has got muck on it or that there is a problem with the shut-off sleeve, so it’s a very good thing that the robot alerts you of that.

Often with these myths people are talking about older systems, says Sales Representative Clive Thomas. “They don’t realise just how much milking robots have progressed in the past 10 years. They are totally different machines that people are investing in today.”

It’s also important to consider the huge amount of Lely support and aftercare offered to customers now. “We spend more time helping our customers with their set up and educating them on how to adapt their system and management than on the actual robot” says Lely Center Midlands General Manager Laurence Loxam.

This is simply not true. The addition of the Lely Grazeway is an essential tool for grazing based systems. Lely had a grazing solution for a number of years and it works really well.

Using a grazing system requires a different approach. Farmers in Ireland have really perfected this with the help of Lely. Instead of just milking cows farmers are focussing on managing their grass. It is totally different and arguably a much better way to utilise grazed grass into milk.

Some farmers worry that if they want to milk more cows in the future they will be prevented from doing so by the limits of their robot. Those investing in a conventional parlour would typically choose one with higher capacity than they currently need to allow for expansion, but any growth beyond that would mean a huge investment. However, with the modular nature of robotic systems it is easier to scale up, by adding additional robots as the herd and other required infrastructure increases.

Robots encourage sustainable and efficient expansion. The perception is that it is hard to expand but it really isn’t and the robots are a much more efficient investment with it being used 24 hours a day, compared with just 4-6 hours a day with a conventional parlour.

Adding more cows in order to put more milk in the tank does not always make business sense. Milking fewer cows and getting more out of them may be more profitable.

To discuss how robotic milking could work on your farm contact your local Lely Center. 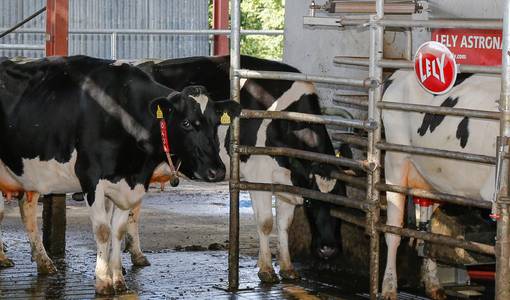