Graham is a self-proclaimed “Techy-Geek” who admits there wasn’t really a need to convert his 40 aside Herringbone shed in February 2014 to 4 Lely Astronaut A4 milking robots, but he wanted to, so he did. Even though his dad was a little nervous about it. “I just loved the whole idea, it really spins my wheels. I love the data that comes off the robots and I definitely had my son’s future in mind” says Graham. Since the installation there has been no looking back for the Barlow’s, who have three young children and now more time to pursue sports on the weekend and spend more time as a family.

The concept of robotic milking is built around the cow to make sure that cows like to be milked within a low-threshold system, making it very different from conventional milking in many ways. One of the main differences being that cows can be milked more in line with their natural behaviour. To maximise the benefit of this concept an environment like that of Fermanagh farm, which utilises the Lely ABC pasture based system and enables cows to be milked under optimal conditions with as few obstacles as possible.

Currently milking 300 predominantly pedigree Jersey cows through 4 Lely Astronaut A4 robots, Graham utilises a split calving program with 9 weeks calving in March and then 4 weeks calving in November. When asked if his current split calving program would be possible without the robots, Graham stated “possible, but certainly not as easy”. Graham can now easily reap the benefits of milking 365 days a year, without having to do any physical milking’s, or worrying about staffing issues.

The Astronaut A4 showcases the latest technology in monitoring somatic cell count levels with the new MQC-C somatic cell count measurement and the MQC milk quality control sensors which together monitors the udder health of each individual cow. This provides vital information to Graham on mastitis, fat, protein and lactose for managing milk quality and cow health. The integrated system monitors the SCC per milking per cow in a highly efficient manner, where deviations are immediately reported to Graham.  Giving him constant control of his herds’ udder health and allowing him to respond quickly to achieve optimal milk quality at all times. Graham states he can now monitor the cell count on every cow, every day. Just like herd testing on a daily basis. I have kept a few cows that I should have got rid of, but because I know each cow’s cell count I can keep ones I would normally cull as they’re more closely monitored. If I had to cull any cows, I would accurately know which ones to do. It removes the guesswork” says Graham.

With only one staff member and production soaring with 300 cows now the equivalent of  360 cows within the old Herringbone system and an exceptional service provided by Lely New Zealand the decision to convert to robots was the right one, with Graham declaring “there are so many pro’s [to the Astronaut A4] that they completely outweigh the cons. The backup service provided, plus the superior product was the primary decision for choosing Lely over competitors. After Sales care was hard to push past”.

The Astronaut A4 robotic milking system continues to provide outstanding results for Fermanagh Farms, so much so, that this Tech Geek says “I like everything about the robots, cows are happy and relaxed. I enjoy the system, it’s pleasurable”.

Automated milking.
It's our system. Is it yours? 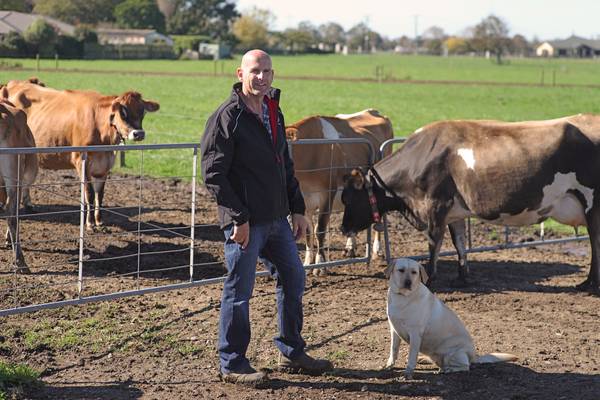