"The system developed by Alexander van der Lely and Karel van den Berg demonstrates how high-tech advances can sustainably assist the agricultural sector,” said EPO President António Campinos about the nomination “And they have enhanced market uptake by licensing their technology, building a company that is competitive on a global stage”.

Together, Alexander van der Lely and Karel van den Berg are driving a new approach to the dairy business, one that focusses on “cow-friendly” automation and making farming operations more efficient. Karel van den Berg grew up on a farm and knew that for robotic milking to be successful, it would need to be accepted by the cows as being part of the barn. “I started from the principle that the cow needs freedom within the milking pen; it should not be fixed or restrained,” he says, adding that “when a cow feels good, has no stress and is offered everything – that’s when it produces the most milk”.

In 1985, Karel van den Berg and his team of engineers began developing the robotic milking system. One year later, Alexander van der Lely’s father filed patent applications for the first two milking inventions, one of which is still in use in the current system. Alexander van der Lely studied production and management engineering in Zurich before joining the family-run business in 1995, when he was tasked with improving the technical performance of the robotic milking system. Although the earliest Astronaut systems were commercially available in the mid-90s, the agribusiness was initially reluctant to use these robots. “One reason why this innovation took a long time to market was because we developed the machine to be operational 24 hours a day which is a huge leap in managing a farm. We also needed the time to convince farmers that this automation was the way forward and to build up the necessary service network.” Alexander van der Lely recalls.

More information about the nomination and EPO

For more information about the nomination and to vote, visit the EPO website 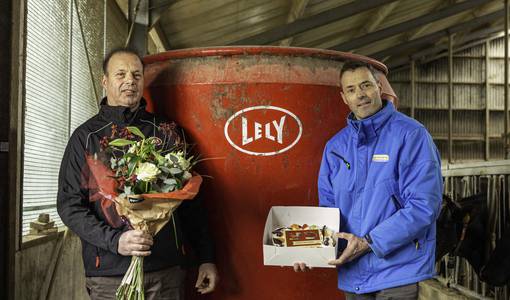 Lely has developed unique milk by adding new precursors to rations. Thanks to the link between the Vector feeding system, the Astronaut milking robot and the Orbiter milk processor, knowledge and insight has been gained about the entire process from feed to milk. The key findings were that the ration does not only affect the composition of the milk, but also the taste. The experiments also examined which feeding components had a positive and negative effect on taste.